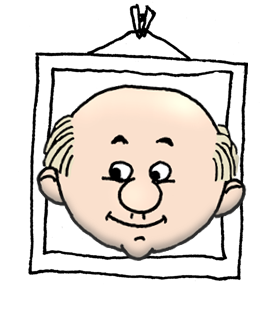 Irresolutus is the boss of the project managers and has been project manager himself not so long ago. Bigboss wooed him when he left his corporate job.

The position has been created lately, as previously the project manager reported directly to Bigboss who found this to be too much of a hassle. The word is that he has been chosen because he is the only person who has never ever disagreed with Bigboss. Maybe, because he has no opinion of his own? Perhaps the reason also has been that he is member of the same tennis club as Bigboss.

These days, the new responsibility is still a stretch for our dear Irresolutus as he had not yet taken the time for a proper management training.

His pet passion is project administration. Here, he feels at home, he loves his project plans and management ratios and can spend hours playing with them.

The combination of lack of time and insecurity leads to him not deciding anything but rather waiting for time and outer influences to decide for him or until the subject becomes obsolete anyway. If he cannot escape from deciding he will revise his decision as soon as someone, let alone Bigboss, shows the slightest sign of disagreement.

To avoid conflicting with his project managers he tends to do everything by himself. When he is in a meeting it will go for hours and at the end he will find a way that no decision will have been taken.

Especially Projectix, the energetic project manager, is more than fed up with this and would rather decide by himself than consulting Irresolutus.