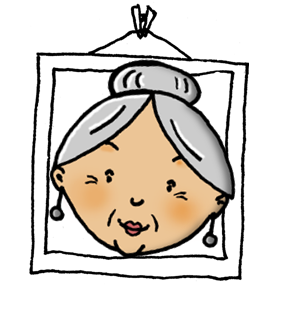 Our manger’s assistant Auntina is exactly what every company should have. She heals all little aches and pains, she conciliates when there is a dispute and makes disappear problems just by magic, before Bigboss becomes aware of them. She always lends an ear and has a smile or some friendly word for everybody.

Even if Bigboss would never admit but he knows that “Hotair” would fall into pieces if Auntina would not be there because she has become the soul of the company.

When Bigboss started “Hotair”, as he was short on money, he asked his aunt, a retired office manager, if she could not give him a hand. Auntina gladly accepted because she bore herself to death at home. Later, Bigboss was able to give her a monthly pay cheque, but she never cashed any of those. She does not need the money and enjoys being in the office much more than staying at home and drinking tea with other ladies of her age.