In the beginning of a project, it is essential for an entrepreneur to get an overall picture of the things to be in the project or out, what needs to be delivered, who will interfere, what are the goals, what is important and what is not. For this, we need a tool to help us gain clarity and clean up the mess. Which tool will win the race, the mind map or the concept map? I will test both in a self-experiment.

But first, let’s see how our dear Projectix will handle the problem …

In the “Hotair” cafeteria: Projectix stands around and meditates over a cup of tea. Projectina and Confusina join him.

Projectina: „Before you can read the tea leaves, you need to drink it up …“ (grins)

Projectix: „Bigboss lumbered me with that new project and I have no idea what’s coming up. And Irresolutus was not of much help either when it came to define the project’s goals..“

Projectina, still grinning: „Already tried to teach a cow to fly? There’s no point doing that, immediately falls back down … No, seriously, what did you expect from somebody who never takes any decisions. You’ll need to find the answers yourself. Try to make a concept map or a mind map. Then, you’ll get a first overview.“

Projectix: „Which one would you use, concept or mind map?”

Projectina: „Depends on how much time you have.“

Projectina: „Then, go with the mind map. It’s faster.“

Confusina: „And why don’t you just start working on your project instead of doing all that planning stuff?“

Projectix, turning to Projectina: „Don’t we have a meeting in 5 minutes?“

Both turn around and leave Confusina alone, slack-jawed: „Hey, what the heck does that mean?“ 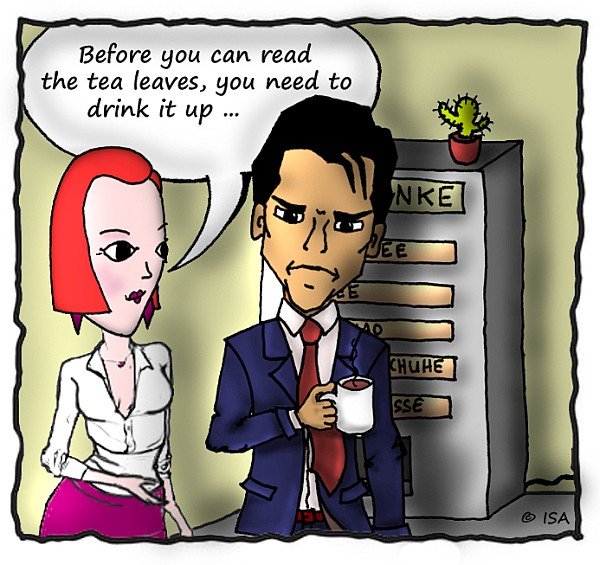 It’s essential to get an overall picture of your project in the very beginning of it. This will prevent you from missing out on important stuff or wasting energy on something not important. But is Projectina right when she recommends the mind map when speed is important?

Which one is better, concept map or mind map? Opinions tend to differ sharply. However, I think you deserve an answer. That’s why I decided to make a self-experiment. To keep it as concrete as possible, I’ll use as example my own company Cactus Competence aiming to establish the brand as the project management expert.

The concept map was developed in the 1970s by Joseph D. Novak from the Cornell University. This might be the reason why it is so beloved by scientists … 😉

The concept map is composed of multiple forms, also called “concepts”, and connecting arrows. These arrows serve to explain the connection with the help of a verb.

Example of a Concept Map

So far so good. It looks quite pretty in such a simple example.

In the “pure” teaching, different box forms would be used for ideas, facts etc. which increases the complexity so that, fortunately, this approach is not practised any more.

I must admit, the idea of creating a concept map for my Cactus Competence project has not very much blown me away. So, it took me over one week before I started the task.

One thing I need to say before you start: Don’t try to create a concept map without a diagram editor. I have rearranged mine 4 times in all before I had a passably acceptable result. By the way, I’ve used the free diagram editor yED to create my concept map.

So, here is the result: 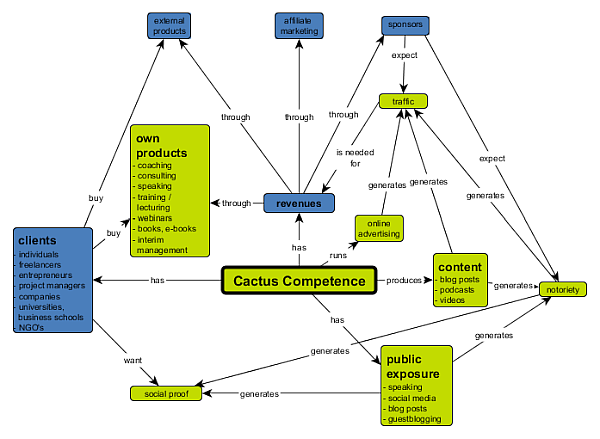 To summarise, I found it quite exhausting to create a concept map. I’m a creative person and get easily distracted by possibilities that appear along the road. This is a real problem with the concept map. I got trapped in the formatting and moving around of the boxes and arrows. After all, I wanted to produce something nice to be presented here. 😉

The mind map has been developed in the 1990s by psychologist Tony Buzan. In the contrary to the concept map, the mind map is widely known over the planet, which might result from Tony Buzan’s more successful marketing methods.

The mind map strictly follows a hierarchical structure, in the contrary to the concept map. The central topic is placed in the middle of the mind map. The subtopics are arborescently placed around this centre and can create any number of sub-levels. You are completely free to chose colours and forms as you like, or even insert images.

Example of a mind map

A word of warning anyway: Don’t overdo as the mind map can get difficult to understand for somebody else. Which, in fact, was not the initial intention of the mind map. It was initially developed to bring one’s own thoughts down on paper in a structured and easy to remember way.

For the mind map too, I’ve used a free software, namely Freemind. But you could easily do it on paper too. In my project work with teams, I’ve often used cards or Post-it notes for the team members to note their ideas and which we then pinned or glued on a wall in a structured, arborescently way. This is a good way to get your team involved.

So, again, here is the result of my self-experiment:

As you see, this time I’ve not wasted so much time on making it look nice. But this is a matter of discipline only as the risk of doing so is quite high, here too. A little image here, a nice icon there, and 2 hours are gone with the wind. I think you agree when I say that it is the impact we want to make that is important. So, when you need to present your mind map to somebody who attaches importance to aesthetics, then take the time to make it nice. If in the contrary, it’s just for your eyes only, then don’t waste time on the layout. But this applies to both, the mind map as well as the concept map.

I suppose, you and I we attach importance to different things. That’s why I try to split my review up into different criteria:

Both maps can be created with the help of freeware. This works pretty well once you got used to them. The mind map can easily be done without any software, right on a piece of paper. For the concept map, in my opinion this is not possible, as one need to restructure the whole thing multiple times.

Therefore 1:0 for the mind map.

For the mind map, I used about 1.5 hours. For the concept map over 4 hours. The main reason for this is that I needed to restructure the concept map multiple times. I mean, one is in the middle of a creative process without any idea where the whole thing is going to and how the final picture will look like. Because of the huge number of connections between the concepts, it gets very laborious to find a clearly arranged layout where the arrows don’t cross over boxes or other arrows (you should have seen my first version…). This is much more easy with the mind map. So, for me, the mind map is so much faster to create that even with the little bonus point mentioned above, it wins by a clear margin.

You can build the mind map in a very intuitive way. Especially when you leave out the formatting options in the first place. The creative flow keeps running. Nobody needs to wait and everybody can take part in the action.

A concept map, in the contrary, is much more laborious to create as you need to find the terms and create connections at the same time. This makes the whole process more complicated and you and/or your team members need to jump back and forth between different operations. This is not everyone’s taste.

Here, the concept map can catch up. With a concept map, it is much easier to show the interdependencies of project’s concepts and to even describe them. This makes clear what to care about when creating your project plan later.

In a mind map too, you can draw some cross connections, but a mind map is not designed for. You will need to make double entries or to add comments. Which makes the mind map less clear.

The concept map wins this point with 1:0.

Generally, it states that the concept map would be self-explanatory, in the contrary to the mind map. For me, it’s even the other way round. The concept map looks confusing, with it’s many connections and without any clear starting point. For a stranger to the project, it needs explanation so that he or she is able to understand. Whereas the mind map was much easier to understand thanks to it’s hierarchical structure and the clear starting point in the middle.

But for this, you can get a picture of it by yourself. Just try to understand my examples above.

The mind map wins the direct comparison by a clear margin of 4:1.

As the structure is predetermined, you can create a mind map much faster and with less effort and less complexity than the concept map. As time is always a critical factor in project management and a priceless asset for business owners and entrepreneurs, I think this result is justified.

The concept map has it’s eligibility for scientists and for projects where the interdependencies of the concepts are of great importance.

My self-experiment has also shown me what the risk of creating these maps is: It always could be more beautiful. You can waste so much time with the formatting and the making nicer. So, be aware of this!

That’s why it is essential to keep in mind what the purpose of your mind map or concept map is: Mainly to give YOU an overall picture of your project.

By the way, you can use mind maps for all other tasks, where an overall picture of all important points of a complex topic is needed.

Find yourself a little, simple project and create a mind map or a concept map, depending of what you like better. It’s a good idea to do this on a regular basis, for training purpose, so that you are used to it when you need one for an important project.

Here again the download links to the free software tools:

Please write your feedback in the comments! If you do not want to comment here, why not head over to Linkedin or Facebook and leave your comment there? 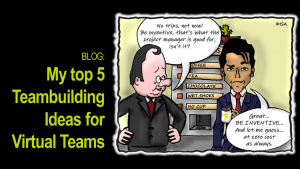 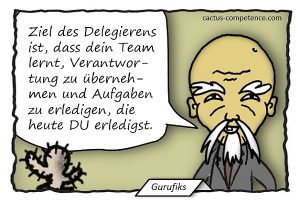 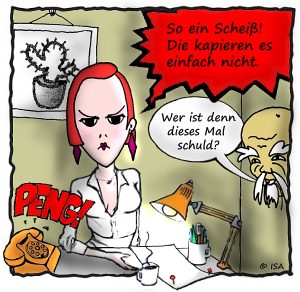